Latest Kannada sports news : IND vs WI: ‘Arshdeep’ jersey was worn by 3 players, fans made fun of him

by nbukkan
in Sports
0
0

India and West Indies are tied at 1-1 in the T20I series.

New Delhi. Team India had to face defeat in the second T20 International between India and West Indies at Warner Park in St Kitts. This match was quite exciting, but during the game one special thing caught the attention of the fans. This special thing was the jersey of an Indian player. This jersey was – Arshdeep Singh’s. At least three cricketers of the Indian team were seen wearing the jersey named ‘Arshdeep’ and this caused a lot of confusion.

Suryakumar Yadav and Avesh Khan were the other two who were seen wearing the jersey. Apart from these two, Arshdeep Singh himself wore his jersey. However, the reason behind why this happened could not be revealed. But such issues were seen in the previous series also. Deepak Hooda was seen wearing the famous Krishna jersey during the ODI series, but the name was taped. However, even then the exact reason why Hooda was wearing Krishna’s jersey was not known, but surely it is expected to be one of the problems in future.

What is this… The umpire gave the ball wide, but the batsman was out on that – VIDEO

Three players wore ‘Arshdeep’ jersey
Talking about the jersey, fans speculated that Arshdeep might have lent his jersey to Suryakumar due to the delay in the arrival of the kit. In fact, Avesh, who took the big wicket of Brandon King in the second innings, was also seen celebrating with Arshdeep’s jersey. Meanwhile, fans trolled Team India fiercely for Arshdeep Singh’s jersey coming out several times. 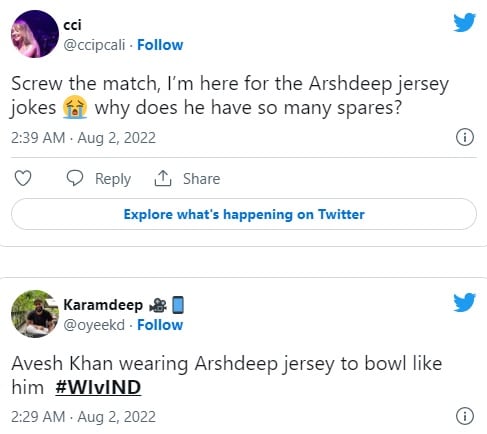 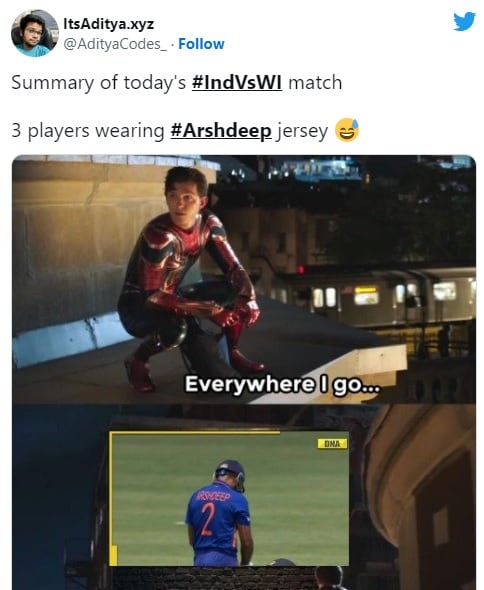 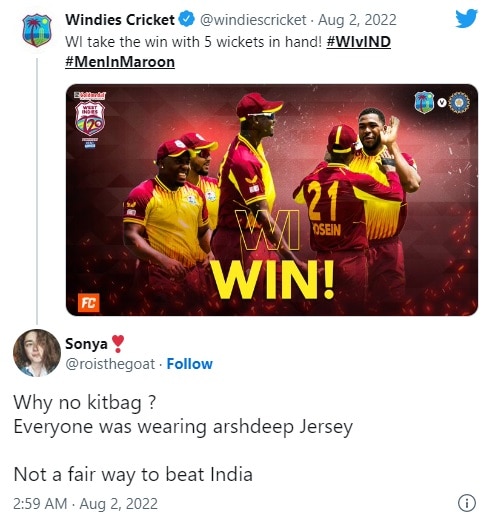 Let us inform that after six wickets from left-arm fast bowler Obed McCoy, Brandon King’s half-century inning of West Indies defeated India by five wickets in the second T20 International on Monday. ‘Man of the match’ McCoy made the best performance of his career, taking six wickets for 17 runs in four overs. This is the best performance by a West Indies bowler in T20 Internationals.

Chasing the target, King scored 68 runs in 52 balls in an innings studded with eight fours and two sixes. In the last over, wicketkeeper Devon Thomas played an unbeaten 31 in 19 balls to give victory to the West Indies.